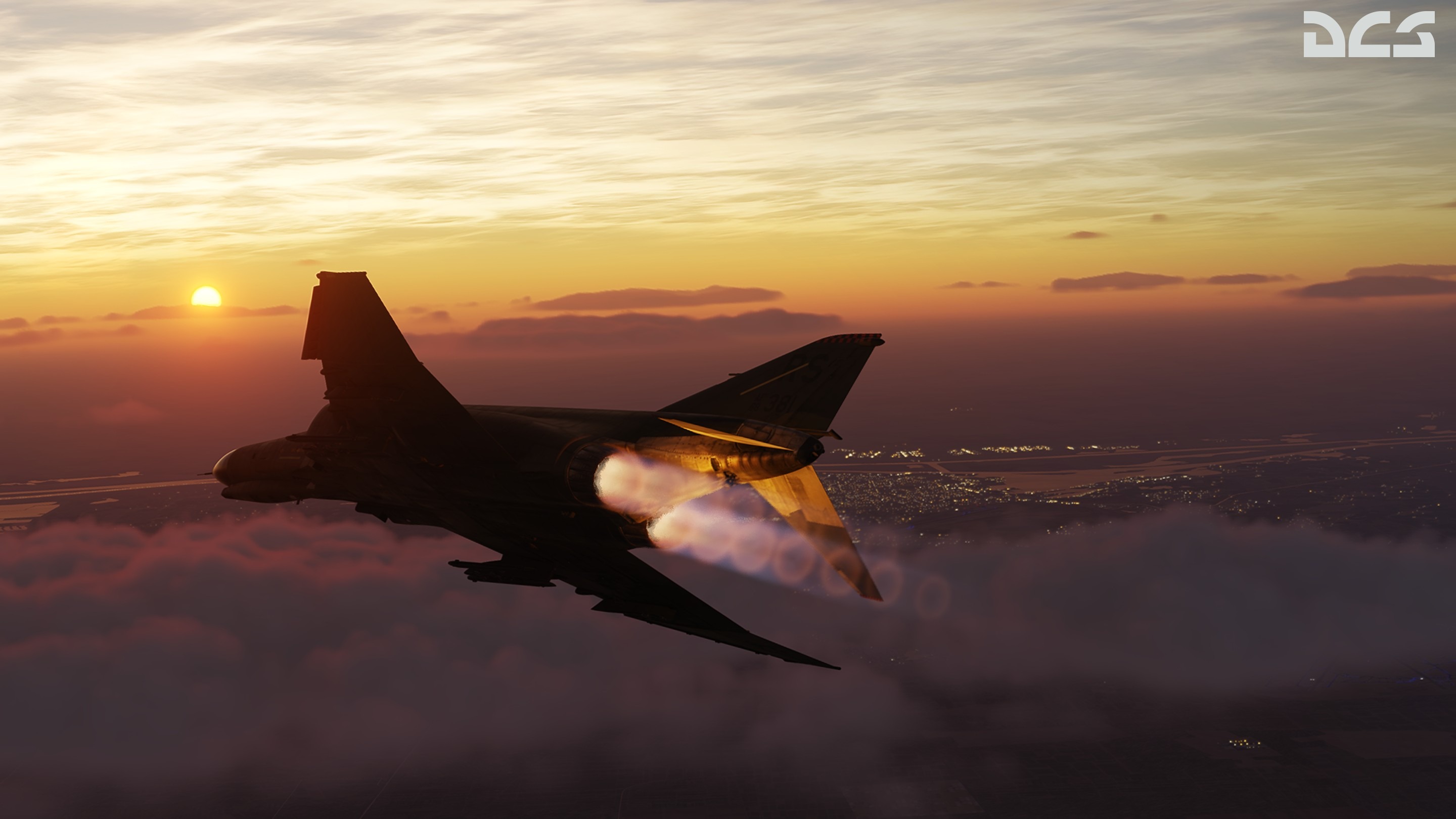 Multithreading has been one of our primary efforts to improve DCS performance, and it is currently in closed beta testing. Initially two threads (graphical and logical) will be implemented, and once the technology is stable and mature, we plan to expand this number. Large and complex missions, both single player and server based as well as the upcoming dynamic campaigns, will see the most significant performance enhancements.

Our render graph was written from scratch along with many other subsystems. We now benefit from parallel rendering that schedules inter-dependent rendering tasks in a correct and optimal order (e.g., mirror reflections first, then mirrors while running other independent draw calls in parallel), frame graph, graphic scenes, scene renderer, and scene manager. We unified all other graphic subsystems that permit node embedding in the render graph. This allows us to rapidly experiment with new graphic pipelines and enhance efficiency. The introduction of our render graph will improve DCS efficiency and deliver optimal performance with modern graphics APIs such as Vulkan.

Implementation of the Vulkan API continues in parallel with the multithreading effort. Our Vulkan renderer is integrated with the new render graph, and it benefits from multithreading by using render graph mechanics of background loading of textures and geometry, rendering objects in parallel, terrain streaming, etc. As a result, many rendering tasks submitted to the graphics card will no longer need to wait for each other and hence be processed simultaneously.

In our endeavor to unify DirectX and Vulkan renderers, we have developed a mod state where both backends produce identical results. We now have two fully compatible implementations that run under the same API. This means that all our applied graphics modules (the code that renders our skies, clouds, models, effects, etc.) will work the same way on both renderers. To achieve this, we ensured that all our shaders could be converted into Vulkan format in addition to implementing a shader converter available from within DCS permitting to compile any shader on the fly. It is interesting to note that the shader conversion has taken an inordinately large amount of time.

The main achievement in 2022 is that DCS now works under Vulkan producing the same visuals as under DirectX. This result is fully ‘transparent’ for our graphics programmers, allowing them to write the same code for both platforms without the need to have separate code paths for Vulkan and DirectX11 and beyond.

The next step is to provide our graphics programmers with the new Vulkan features compared to DirectX 11. These include new types of shaders (as per Shader Model 6 and further), ray tracing, some advanced rendering techniques, such as GPU driven rendering, and similar.

Deep Learning Super Sampling (DLSS) 2.0 is coming to DCS this year. DLSS is a family of real-time deep learning image enhancement and upscaling technologies for RTX 20, 30 and 40 series Nvidia graphics cards. The goal of this technology is to allow most of the graphics pipeline to run at a lower resolution for increased performance, and then infer a higher resolution image from this that contains the same level of detail as if the image had been rendered at this higher resolution. This allows for higher graphical settings and/or frame rates for a given output resolution, depending on user preference.

In addition to DLSS, Nvidia Image Scaling (NIS) will also be available. NIS is a scaling and sharpening tool with an algorithm that uses a 6-tap filter with 4 directional scaling and adaptive sharpening filters to boost performance. This is best used for non-RTX Nvidia graphics cards that do not support DLSS.

Following the completion of DLSS/NIS, we will investigate Fidelity FX Super Resolution (FSR) for AMD GPUs.

2022 saw great progress creating the tools and technologies to support a precise spherical Earth map for DCS. Because this map will be based on current day, it will operate independently of the current and future regional maps that allow historic maps such as World War II, Korea, Vietnam, and other scenarios. Spherical Earth efforts will continue in 2023.

Building upon the weather enhancements that were introduced with DCS 2.7, we have been further developing weather to include moving clouds and towering cumulus clouds and more sophisticated atmospheric phenomena. New fog and dust storms are being developed that are integral parts of the volumetric cloud system. The old DCS fog is a separate system that is calculated for a flat earth. It does not consider shadows from the terrain and clouds, so it has limitations. The new fog will be computed for a spherical earth and takes shadows into account. We also plan to optimize the volumetric clouds and increase their basic quality. A separate and complex project currently in development is the dynamic cloud generator which will then need to be integrated with the dynamic weather systems of low/high pressure systems and new/evolving cloud types.

A later task, once the foundation is complete, will be to provide AI line of sight blocking in addition to light direction/scattering visibility limitations for AI.

2022 saw significant improvements to how Forward Looking Infrared (FLIR) is modeled in DCS World. In addition to writing the technology needed to create the characteristics of the camera, a great deal of work is being invested into the enhanced thermal signatures of mobile units, map objects, environmental heating, and cooling, as well as specific visual effects and artifacts. We will also be adding initial thermal signature conditions for ground units in the Mission Editor.

2022 saw the completion of all major engineering components of the EDDCE. In 2023 we continue development and testing and making improvements to these components as well as adding new features where needed. We are also enhancing the mechanics in the campaign editor to avoid issues that may arise when the EDDCE is used for different maps. The next big tasks include transferring mission data between player and AI pilots and creating a specific graphic user interface.

Please see our previous Newsletter for greater detail on the subject.

2022 has focused on the continued development of the Supercarrier ATC system. Following its completion, the next focus will be to bring those advancements to airfields. This is certainly no simple task and will require three unique ATC systems for: western modern day, eastern modern day, and World War II.

A complete redesign of the modern day, western ATC system is underway. In parallel, modern day western radio communications for Flight, Other Flights, AWACS, and Tanker are also being revised.

Starting with new AH-64D pilots in 2022, this work will continue into 2023 to include new infantry and more pilots with more life-like models and animations. Priority pilot models first include the F/A-18C and F-16C pilots.

Starting with the Supercarrier deck crew, we continued to develop this feature in 2023. We are now continuing this effort to include startup and taxi to catapult deck crew logic and animations. Following the completion of deck crew, we then plan to use this technology to create airfield ground crew and interactions.

DCS 2.8 saw great advancements in world lighting, but our efforts continue. The next big lighting advancement will be the introduction of multiple, global light sources, and no longer only the sun and moon. This will allow more realistic night scenes that account for airfield flood lights, city lights, and more. You can see these initial efforts on the Persian Gulf map.

First introduced in 2019, the free Voice Chat integrated into DCS allows Voice Over IP communications based on chat rooms and how you have your aircraft radios configured. 2022 was focused on improving radio communications and stable connections, even over a VPN. In 2023 we continue to develop this feature with realistic radio sounds, effects and plug-and-play audio device compatibility.

Some of the more notable visual effect tasks include munitions with airburst fuzes, napalm, and Mach shock cone based on airspeed and weather around the aircraft.

VR is very important for all and we have heard your concerns regarding performance and we continue to optimize VR performance for DCS. The primary areas of VR performance improvement are multithreading and the Vulkan API, particularly for larger missions. We are also reviewing all world Level of Details (LODs).

For ground units, our primary AI tasks include improved pathing and implementing suppression effects for more than just infantry units.

Whilst the updated BFM AI can make a significant difference in how the AI flies, the General Flight Model (GFM) will provide improved flight dynamics for AI aircraft that better constrain the aircraft to true-to-life performance.

GFM is a significant improvement to the Standard Flight Model (SFM) that is based on drag and thrust characteristic trajectories. The SFM can provide a good Center of Gravity trajectory model, but it relies on reliable source data to tune the overall performance that includes the entire flight envelope, sustained and instantaneous turn rate, energy gain, etc.