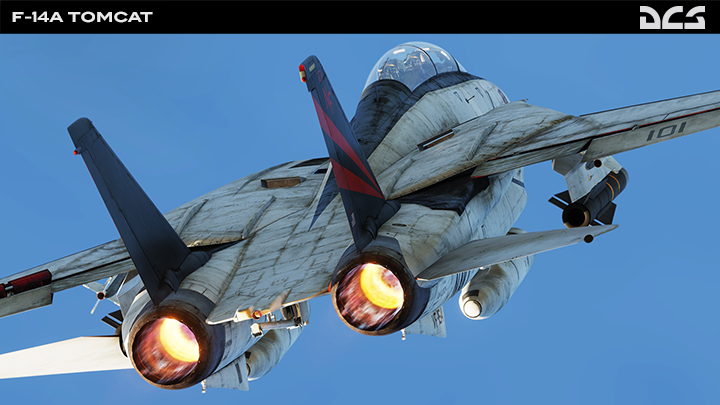 “The F-14A was the first 4th generation fighter aircraft and needs little to no introduction. It was introduced
to a widespread audience early on and has been admired ever since. It’s remarkable capabilities both in
A/A and A/G made sure it remained in service longer than its successors and it is still in active service with
the IRIAF today. It’s fame is unparalleled and presents sheer excitement and tough challenges to its pilots.

As we continue on our journey of building the most well known and certainly the most iconic variant of the
Tomcat around, we continually re-evaluate what our goals are with the -A and what we want to achieve.
Based on this process, we’ve ended up by expanding our original scope, and will be shipping the following
F-14A variants in the coming months:

F-14A-95-GR: Early F-14A for IRIAF. These jets will have certain limitations and modifications, such as the
lack of TCS and fuel pylons.

F-14A-135-GR (Early): This will be an earlier representation of the F-14A, equipped with the ALR-45 RWR
and will also come with a number of minor variations such as early gun vents, alternate de-fog systems,
and other minor differences between late and early ALR-45 equipped F-14A’s.

F-14A-135-GR (Late): This version represents a later, ALR-67 equipped F-14A.November 18th saw the
release of ALR-67 equipped F-14A-135-GR (Late). While this represents a closer analogue to the current
F-14B, it also allowed us to roll out the F-14A in a controlled, stepwise process. The ALR-45 equipped
F-14A will not be far behind, which will not only introduce more significant changes in cockpit avionics,
but also implement the full overhaul of RWR and EM spectrum emissions upgrades planned for both
the ALR-67 and ALR-45.

Wednesday’s patch also included the introduction of yaw strings and a complete sound overhaul among
many other items. Check out this short sample video of the new sound here For more info please see
the full changelog here.

In association with the DCS: Livery Art Group. Winners in each category will have their submission included
in the official release for the corresponding DCS module (conditions apply, see below).

Each submission should be presented with no less than 7 screenshots; front, back, left side, right side,
top and bottom of aircraft in full daylight and full view of the screenshot, preferably in 1080, 2k or 4k quality.
These can be taken in ModelViewer or insim.

We are pleased to announce our annual DCS World Autumn Sale. Our EShop sale has started and runs
until the 7th of December with most products seeing up to 50% discount.

Modules with a 30% discount

Modules that do not participate in the Autumn Sale

DCS: P-47D Thunderbolt will soon be released to Stable, meaning this is your chance to take advantage
of the Early Access discount and the Autumn Sale for a combined 30% off the Jug.

The dive recovery flaps used for faster pull outs during dive bombing and when in compressibility have
been added to the Flight Model. The water injection system has now been implemented to maximise the
power output of the R-2800-59W engine.

Forced water injection causes the turbocharger pressure to increase and actuates a derichement valve
in the carburettor. When water is injected the fuel-air ratio decreases, this provides fuel economy without
risk of detonation.

Our on-going work on the new Damage Model has led us to tune the durability of certain structural elements.
This has improved G overload limits when the aircraft is damaged.