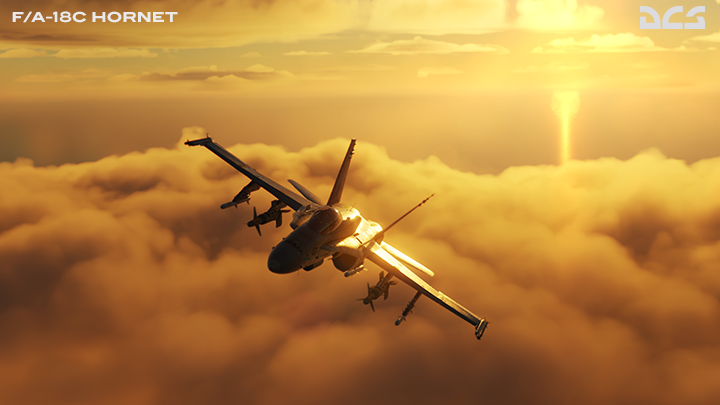 An issue where RWR Contacts displayed on the wrong azimuth has now been resolved. We fixed an issue where moving the TDC caused the radar beam to stick. We also fixed a JSOW A/C manoeuvre error that caused a miss.

Fuel Low BIT has been added, as well as auto-lase for the GBU-24 Paveway III. We are planning for these features and many more to be released in the next update to DCS World Open Beta 2.5.6.

Check out the In Development Screenshots.

Locating ground targets can be a difficult task, an important tool that can assist you is the Ground Moving Target (GMT) Air-to-Ground (A-G) radar mode. When enabled, this mode detects moving ground units and allows you to designate them for tracking. Note that GMT will not detect stationary targets.

When paired with the AGM-65F Maverick and laser-guided bombs, GMT can be a useful tool for detecting, tracking, and engaging mobile targets.

Whilst the general MAP Air-to-Ground radar mode has been available for some time, we will soon introduce the SEA A-G mode. This mode allows the radar to detect and track ships out to 80 nm. This is particularly useful for engaging ships using the AGM-84D Harpoon anti-ship missiles with specific range and bearing targeting. SEA mode can also be interleaved to display MAP ground returns.

When a target has been designated in SEA mode, the targeting pod can also be slaved to the target.

We are pleased to announce several new defensive features planned for the next update. These include the addition of Semi/Automatic (S/A) and AUTO expendable countermeasure programs, the Airborne Self-Protection Jammer (ASPJ), and jammer effects on the radar.

We’ll be adding the Transmit Designate (TXDSG) option on the Situational Awareness (SA) display. When enabled, it allows you to transmit suits to ground designation points and Launch & Steering (L&S) targets for flight members and friendly aircraft on the same Link-16 network.

As well as the substantial push to complete the Hornet’s new features, we would like to mention a notable addition:

A new civilian ship equipped with a functioning helipad for:

The headwind and tailwind anomalies have now been fixed.

You can expect these minor fixes and many more additions to be included in the next Open Beta 2.5.6 update planned for next week. We are incredibly optimistic about where we’re heading, and we believe that the opportunities for developers and the creative community are endless, as are all the positive and meaningful benefits to our customers.