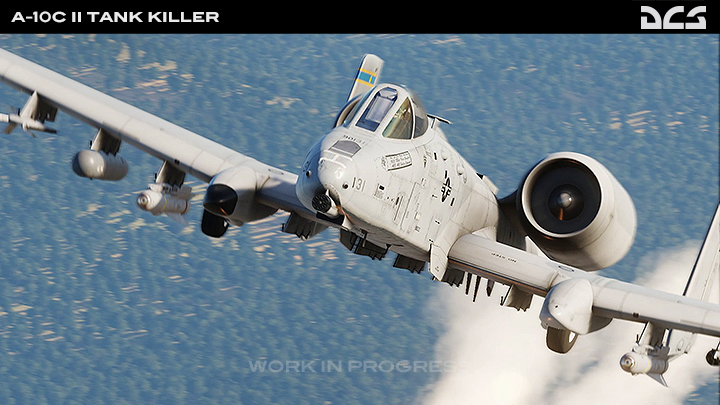 As we prepare for the release of DCS: A-10C II Tank Killer by the end of this month, we are carefully checking
the Flight Model’s buffet and stall implementation, instantaneous turn rate, sustained turn rate, and maximum
speed at different altitudes. These checks enable measured parameters to match the flight manual charts with a
precision to within 3%.

We found that buffeting affects the airframe at a lower AoA than is stated in the manual, this affected aircraft
handling during deliberate stalling. We are working on this issue, which will result in a significant improvement
to overall aircraft behavior in this phase of flight.

In parallel, many of the new systems are now functional including laser-Maverick, APKWS, and the GBU-54 LJDAM.
Work continues on the Helmet Mounted Cueing System (HMCS) and associated HOTAS commands and updating the
cockpit and external art.

This week we fixed an issue with A/G radar heading figures overlapping when switching from Map to EXP1-2-3.
Other strange behavior when switching between A/G radar EXP modes and A/A radar has now been resolved.

When Unlimited weapons mode is activated, the salvo / ripple replenishment levels now display correctly. Threat
circles on SA page now show even if the threat Icon is not visible. The SAM threat rings draw order on the SA page
has been fixed. Swapping HSI/SA on left and right MDI now functions correctly.

A fuel transfer issue from external tanks has now been fixed. Radio volume issues and the COMM AM/FM change on
the UFC have been fixed.