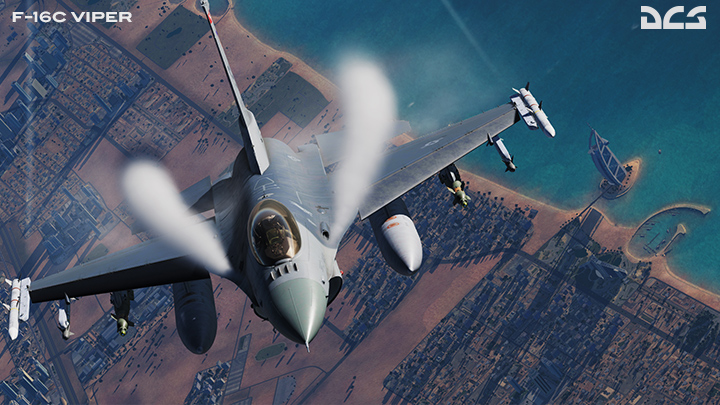 As with DCS: F/A-18C Hornet, we are creating a development roadmap for DCS: F-16C Viper.
This is an important step in prioritising your wishes and we encourage you to take part in the
DCS: F-16C Viper Features Ranking Survey.

The F-16C Viper Development Team is working on new features and tuning existing ones.
These include but are not limited to:

AGM-65D/G Maverick
E-O Visual (VIS)
E-O (BORE)
EO submode selectors have been added to the SMS pages.
Maverick weapon selection functionality has been added.
The power and warm-up timer functions have been added.

AGM-88C HARM
We are currently working on the SMS, WPN and DED pages, as well as the HARM as a Sensor (HAS) mode.

Liveries
In cooperation with several talented community members, highly accurate liveries for the Israeli,
Turkish and United States air forces are being finalised. We hope this will be appreciated for all of
you who are interested in developing and flying missions in DCS: Syria

Flight Dynamics
Several subject matter experts are involved in further improvements to the flight model and flight
control system. This will provide substantial accuracy enhancements and we look forward to your feedback.

Additionally, a white paper has been prepared that describes some of the basics of our Flight Module (FM)
programming, in particular with regards to the way we use the sources available to achieve a high level of
accuracy in our simulation.

A 10 mission campaign for the F/A-18C Hornet by our third-party developers Badger 633 is now available
to download on Steam. It comprises the next chapter of six previous The Serpent’s Head missions released
earlier that are freely available in DCS user files.

F-86F Sabre - Hunters Over the Yalu

The Hunters over the Yalu Campaign for the F-86F Sabre by Reflected Simulations is also now available to
download on Steam.

Command the 67th Fighter Bomber Squadron and attack enemy-held bridges, bomb factories, and strafe
supply columns. Support US troops as they fight fiercely on the ground. Survive heavy flak and fighter attacks,
and then transfer to the legendary 39th Fighter Interceptor Squadron to carry out large fighter-sweeps in MiG
Alley over the Yalu river.