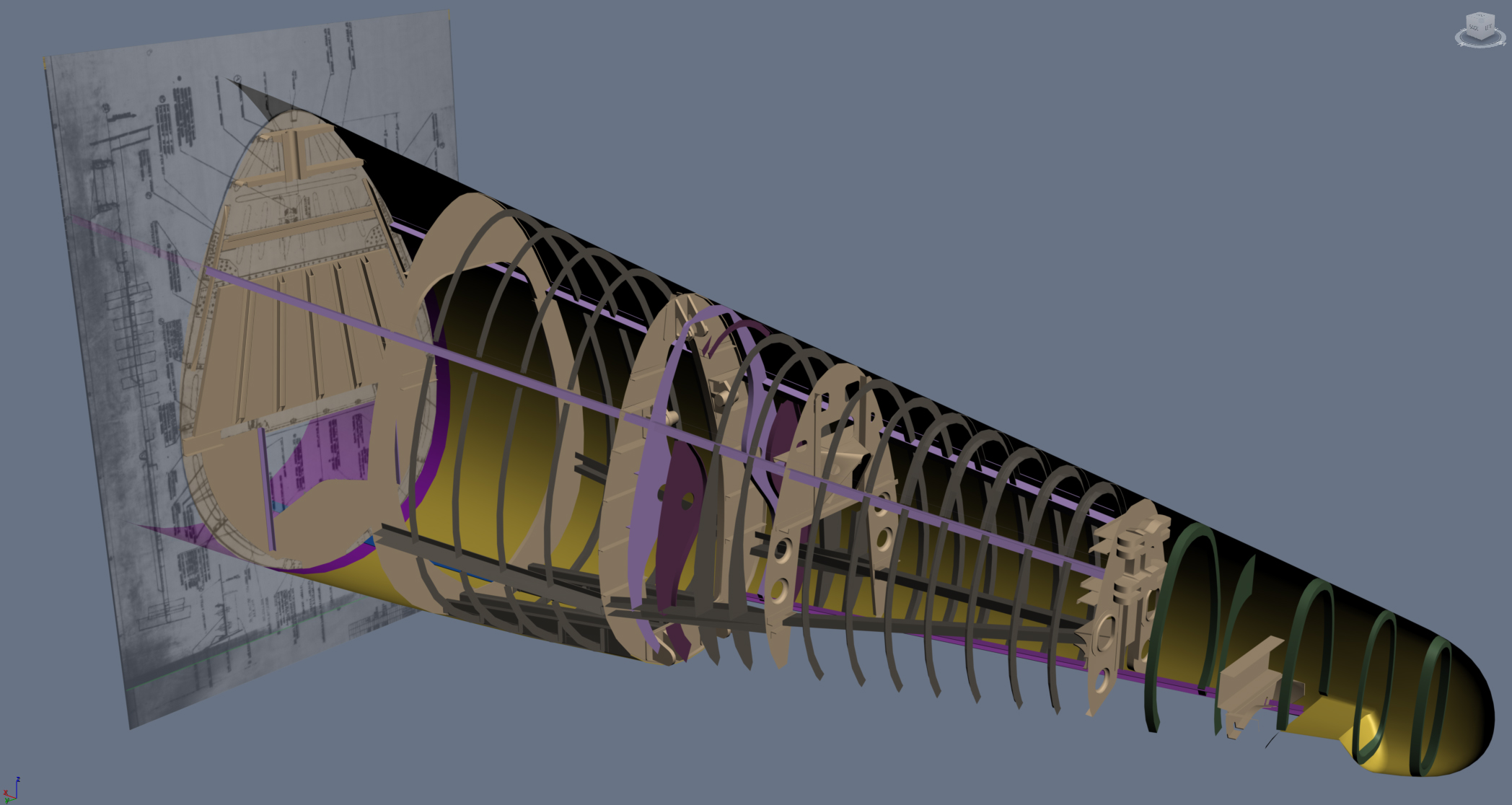 The final touches on the airframe included, animation of the hydraulic hoses, flap control rods, and the fabric covering the large hole where the landing gear struts rest into. Several techniques were used to accomplished such features, and proved time consuming to get the correct movements as best as possible. Below are sample videos showcasing the works.

Modeling of the internal frame work is coming along nicely too. When the tail section falls off or takes critical damage, this structure will be seen in all it’s glory.

In the cockpit, we have developed a better approach of how the ultra-violet lighting reacts with the gauges and texts. Using a complex system of layered textures and volumetric lighting, we came up with a visually appealing setting; lights that reflect off of near by surfaces, light bloom from fatigued eyes, and faint glows from distant objects. A video below showcases the work. 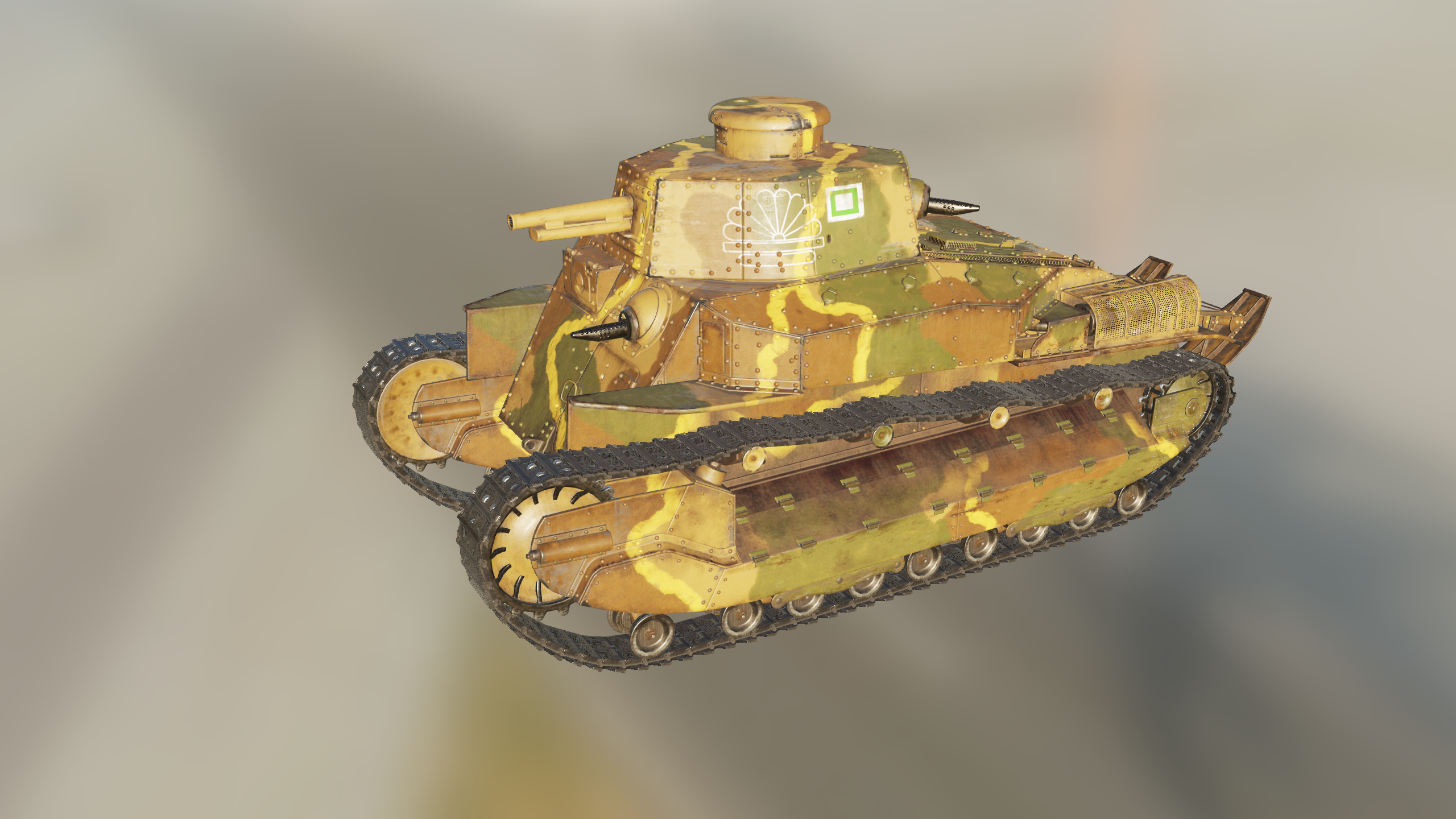 Today, we are happy to report that our Japanese assets are nearing completion! Animations and damage models are finished as well. Barring, some texture adjustments, our next step will be integrating them into the DCS environment. We’ll be working closely with Eagle Dynamics to ensure everything works as it should. Below are a few examples of what we have. Please keep in mind all screenshots are a work in progress. 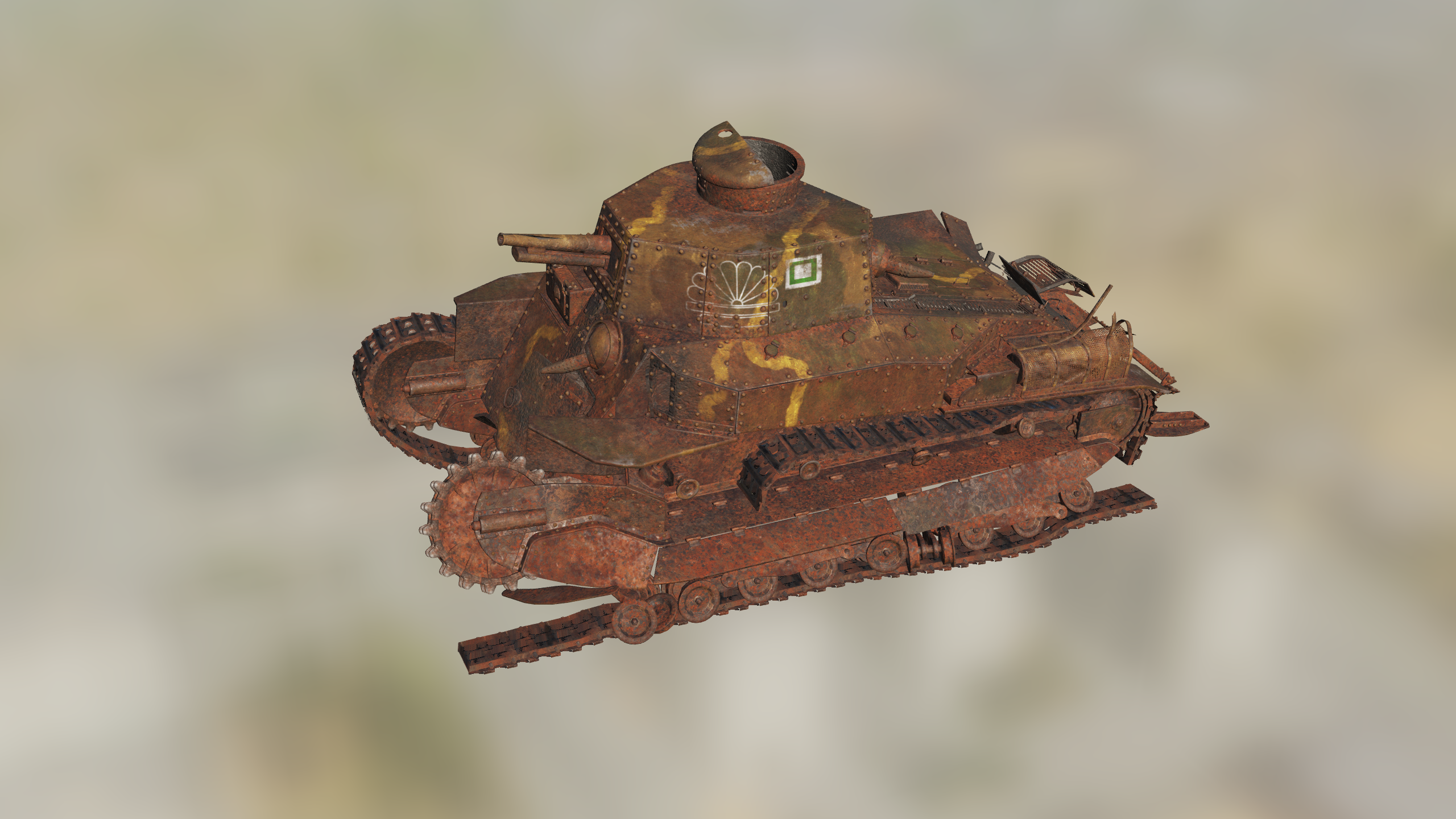 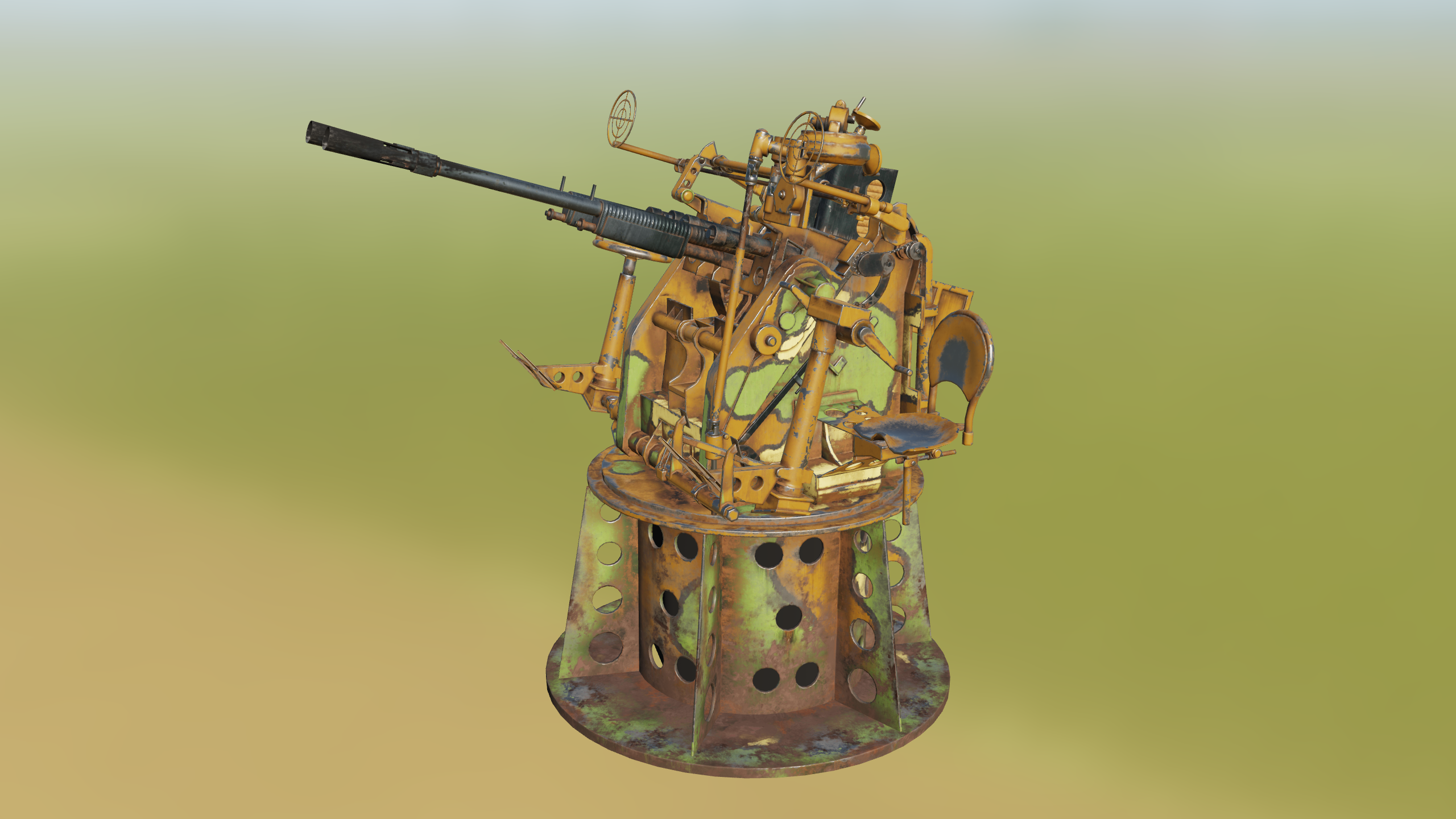 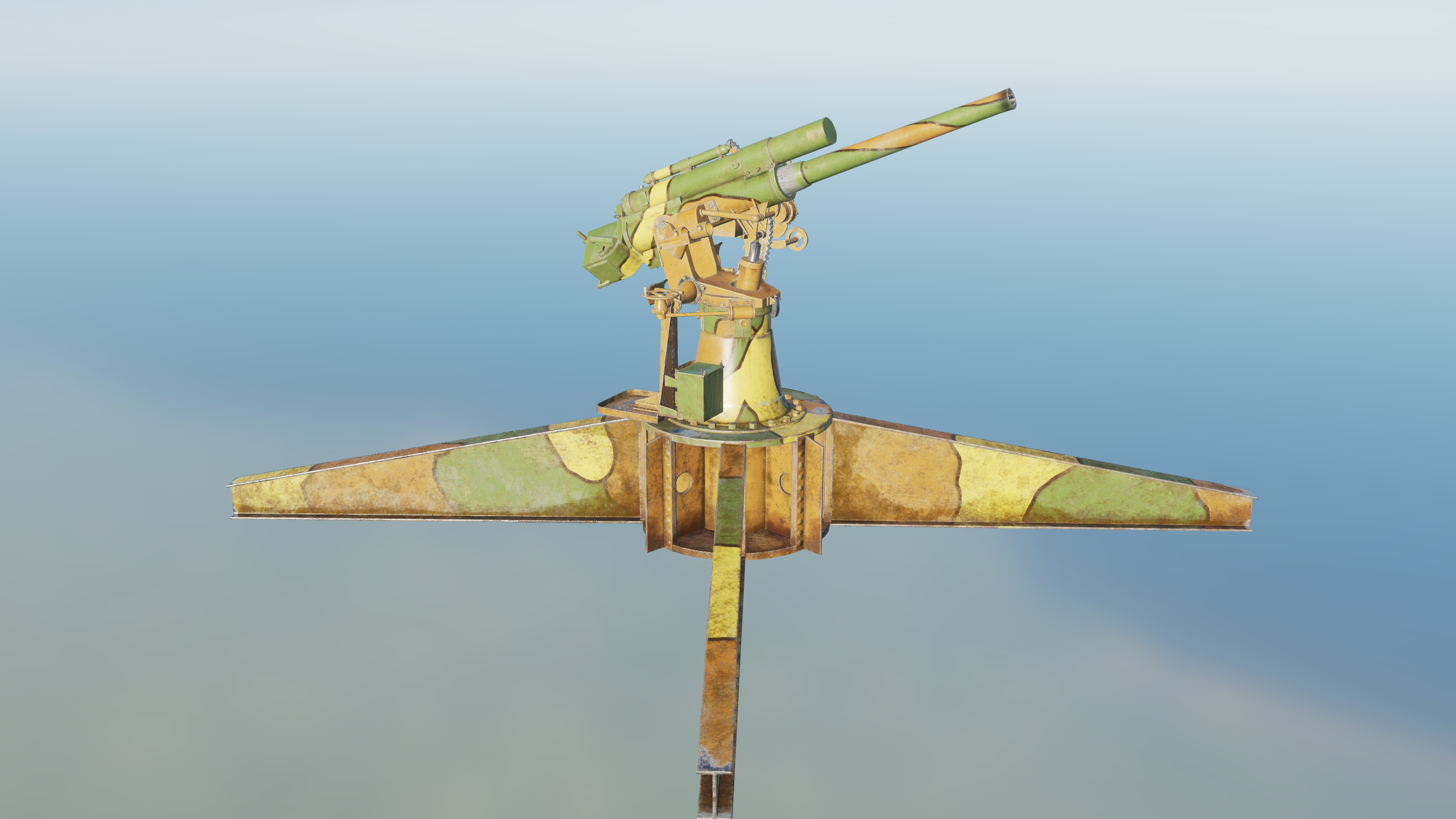 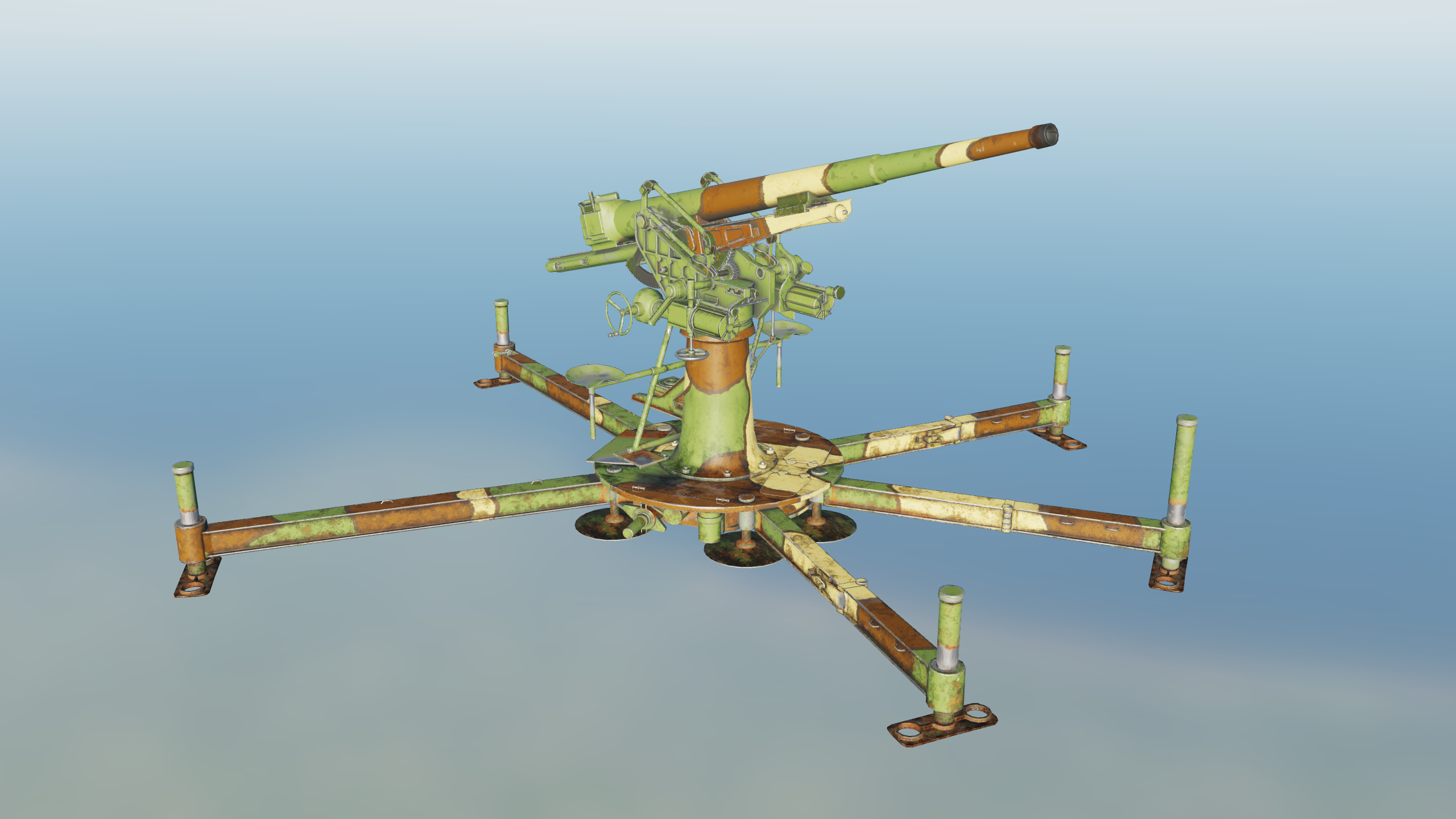 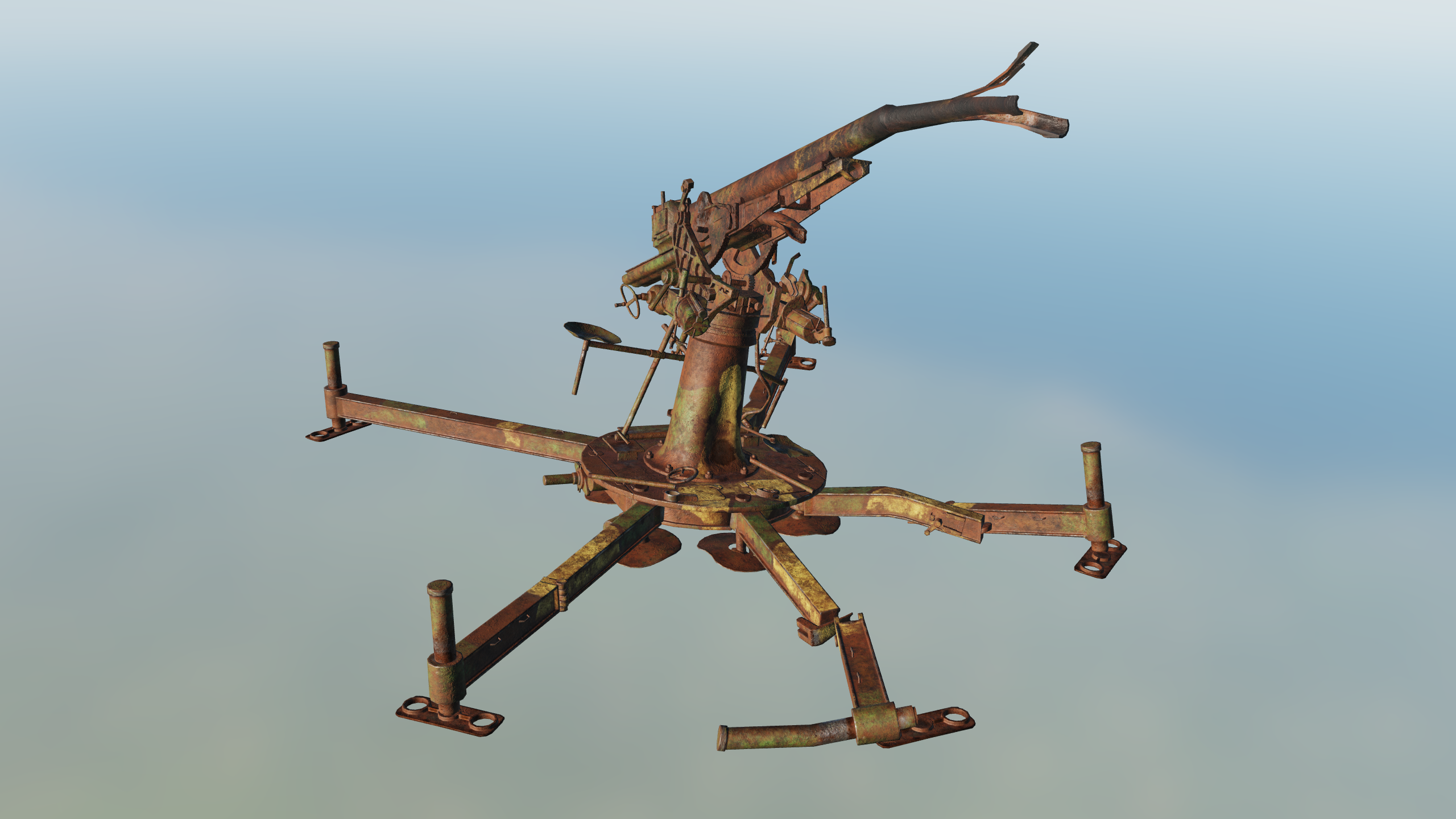 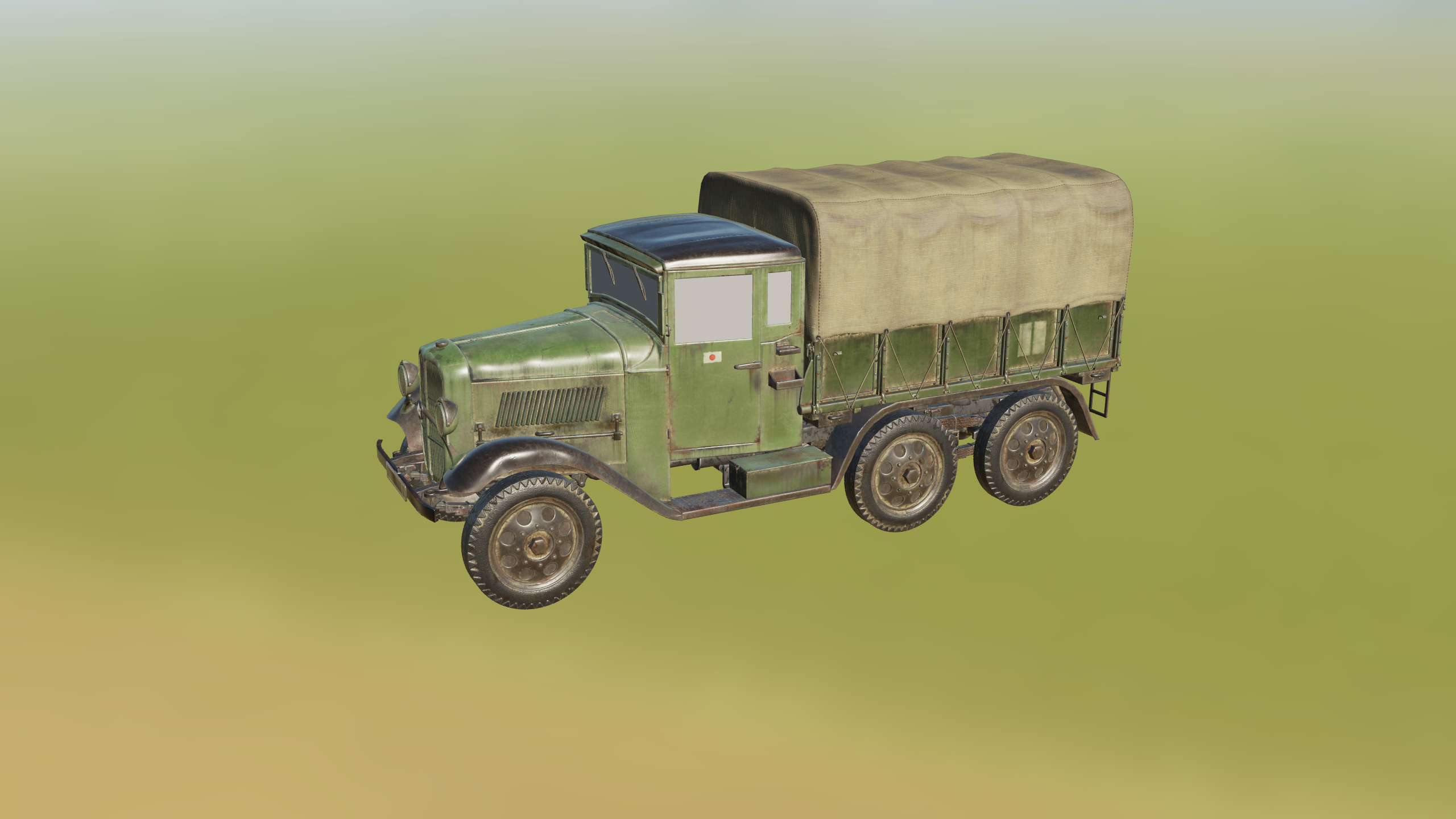 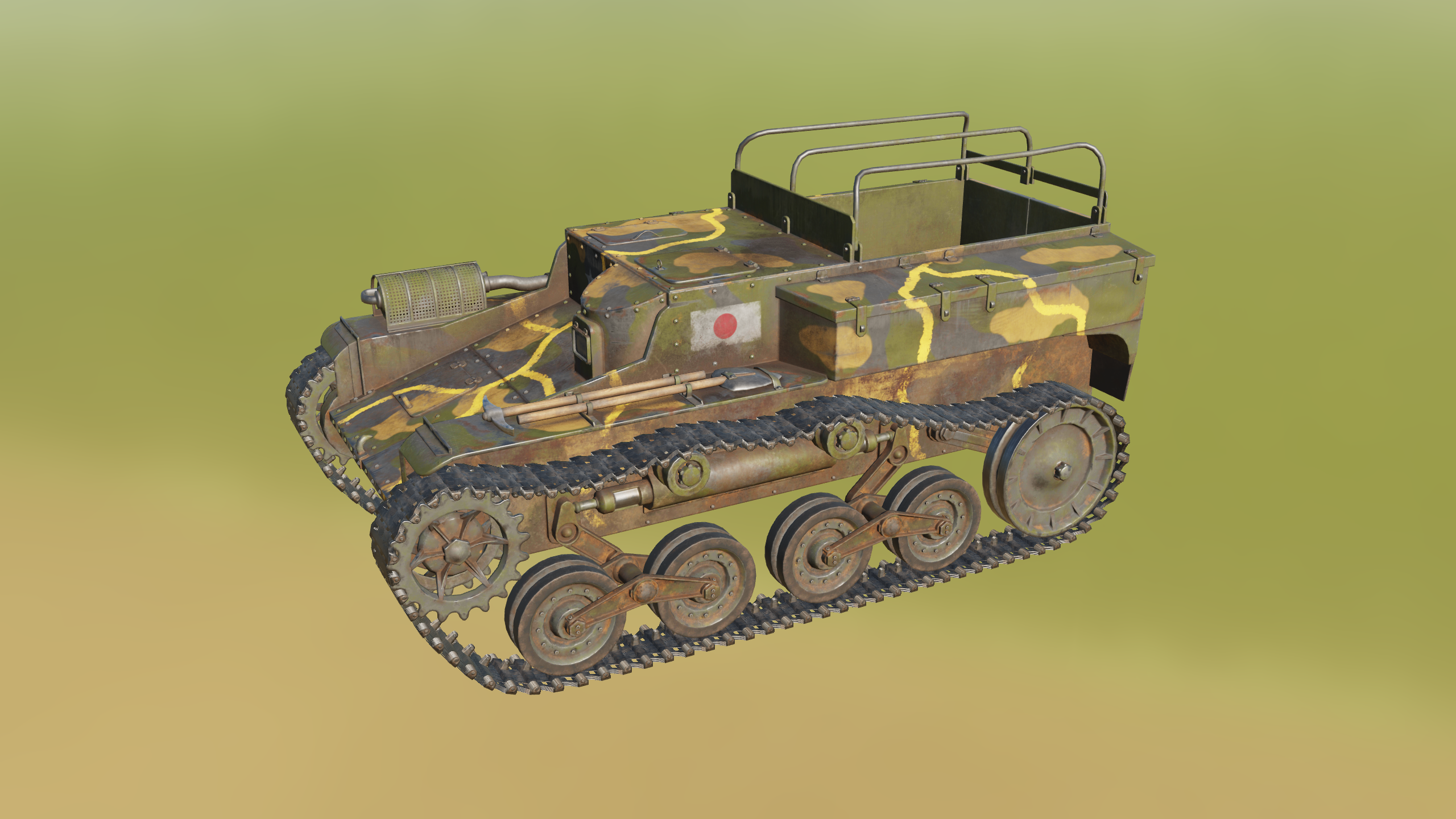 Moving on, our programmers have been working on the AI taxi routes, parking spots, weapons and sensors. While we don’t have many screenshots that can be shown to showcase their work, we did manage to capture two, when they finally fixed the bug causing the aircraft not to follow the elevators going down to the hangar deck. Apalogies for not turning the lights on; just trying to conserve energy.

Our artists have also been fixing a few areas on the Essex model, adding the missing deck lights, correcting a few 40mm mounting positions and adding missing Mk.51 directors. 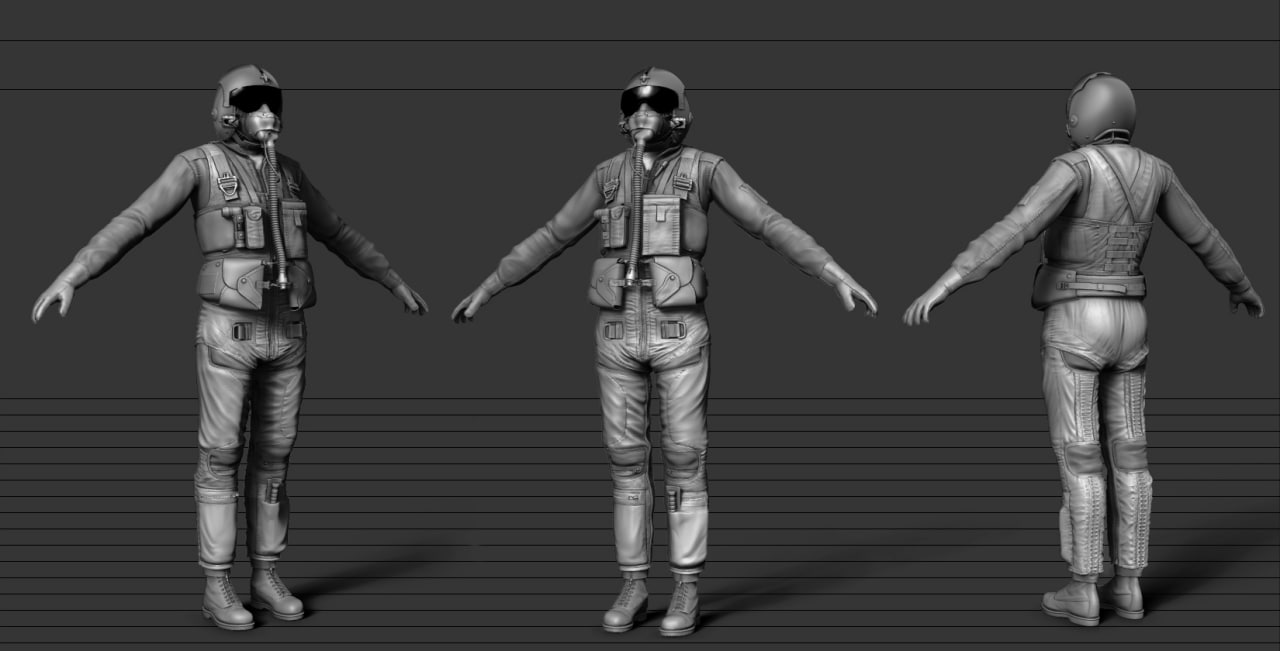 As the Corsair gets closer to the finish line, we have been able to allocate some time on an important aspect of the cockpit. The pilot! Our detailed pilot includes the following items that would have been found on any U.S. Navy and Marine aviator during the late 1960s era:

With the pilot model now finished, we will begin on texturing and animations. 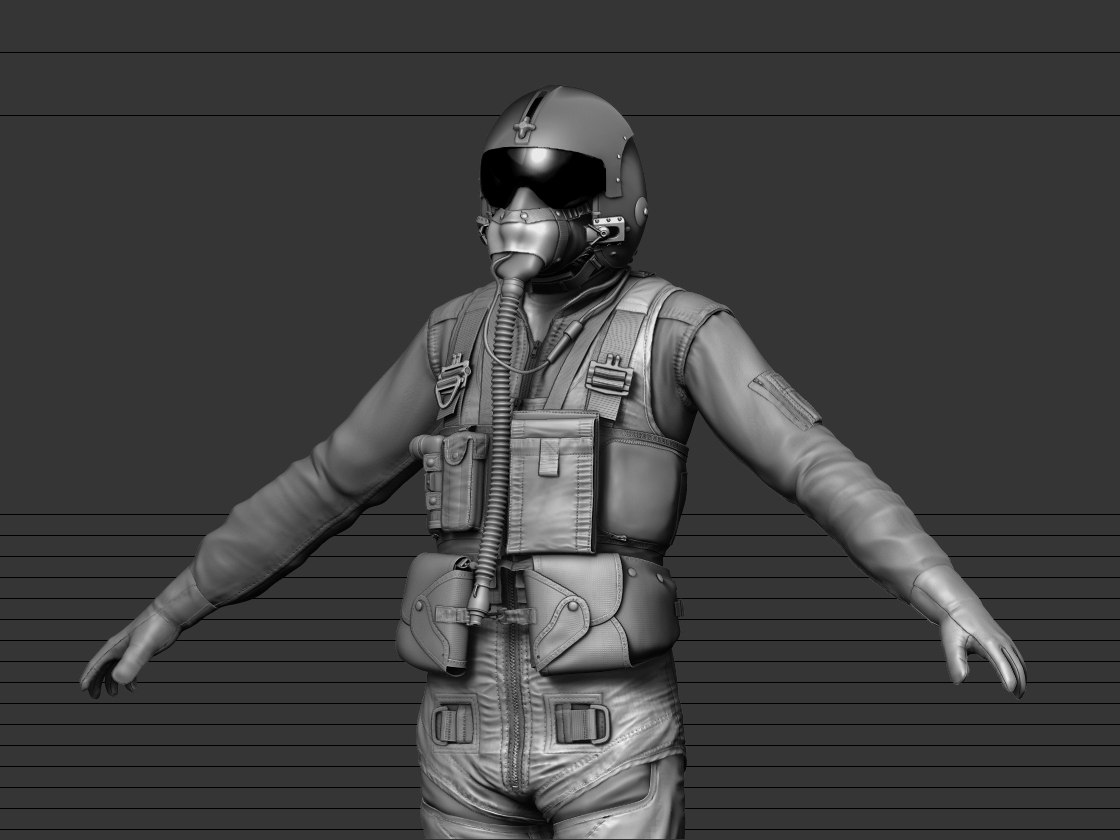 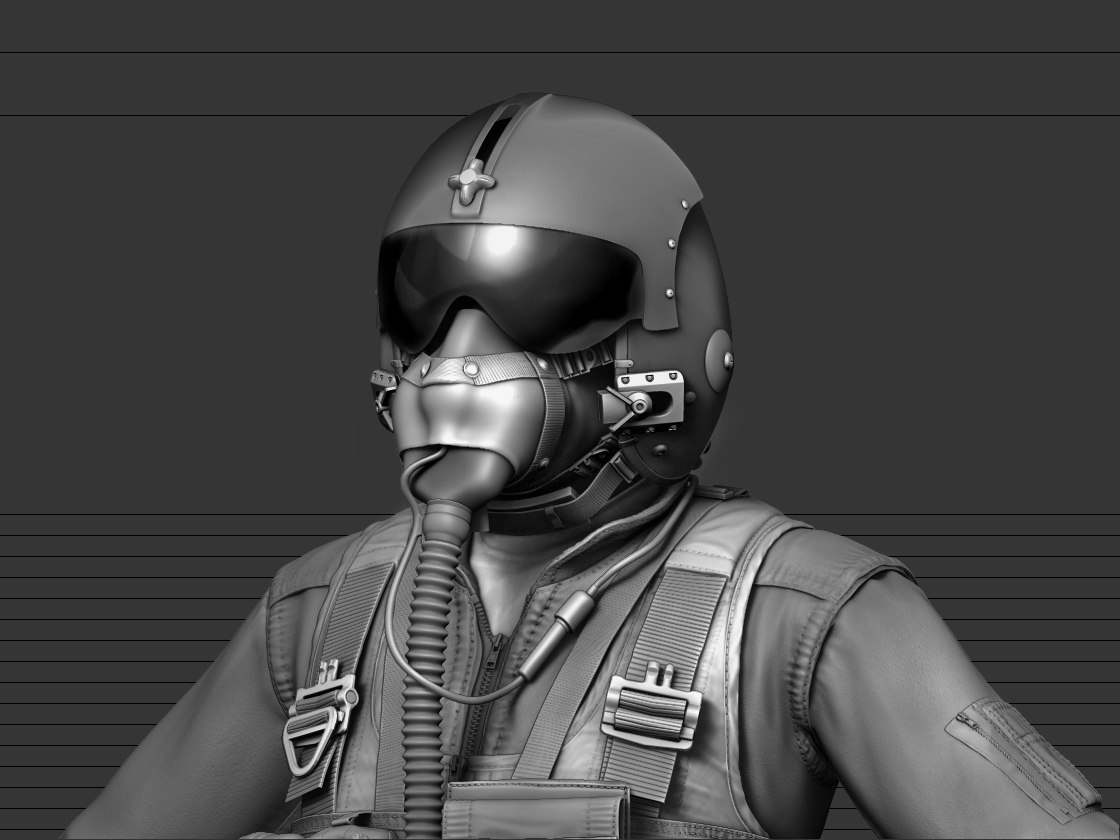 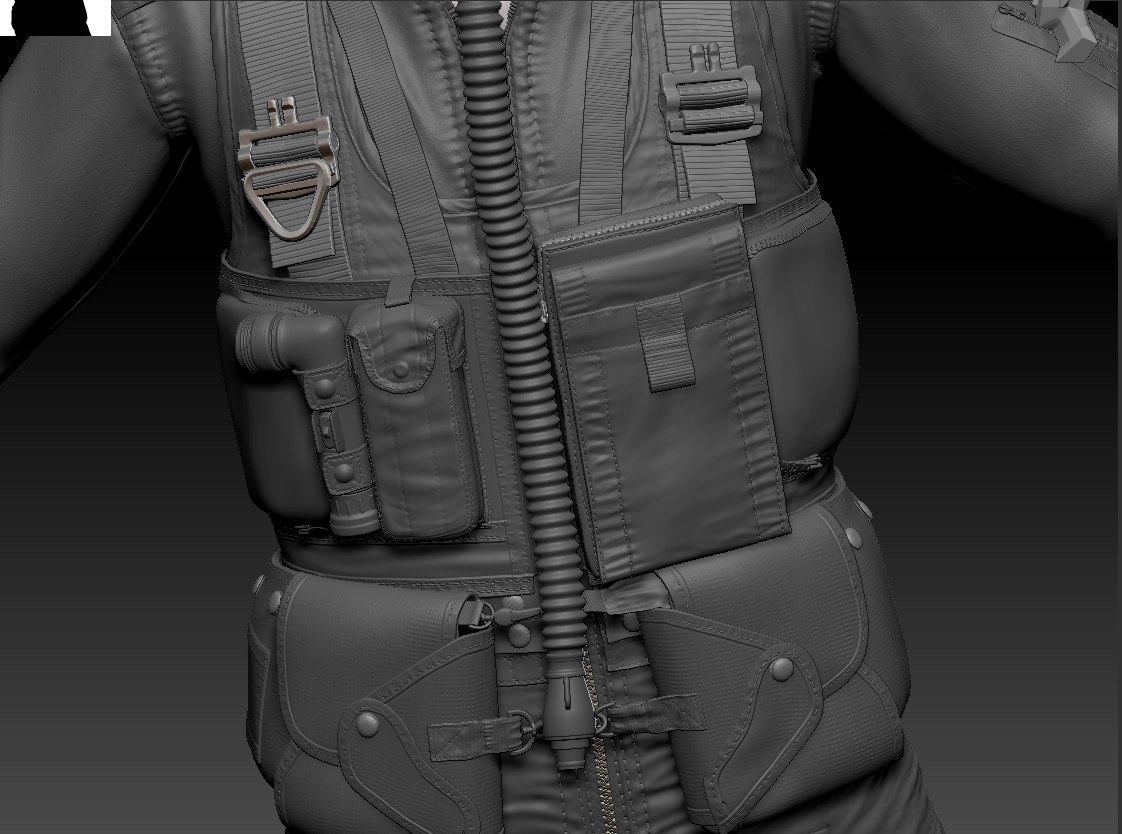 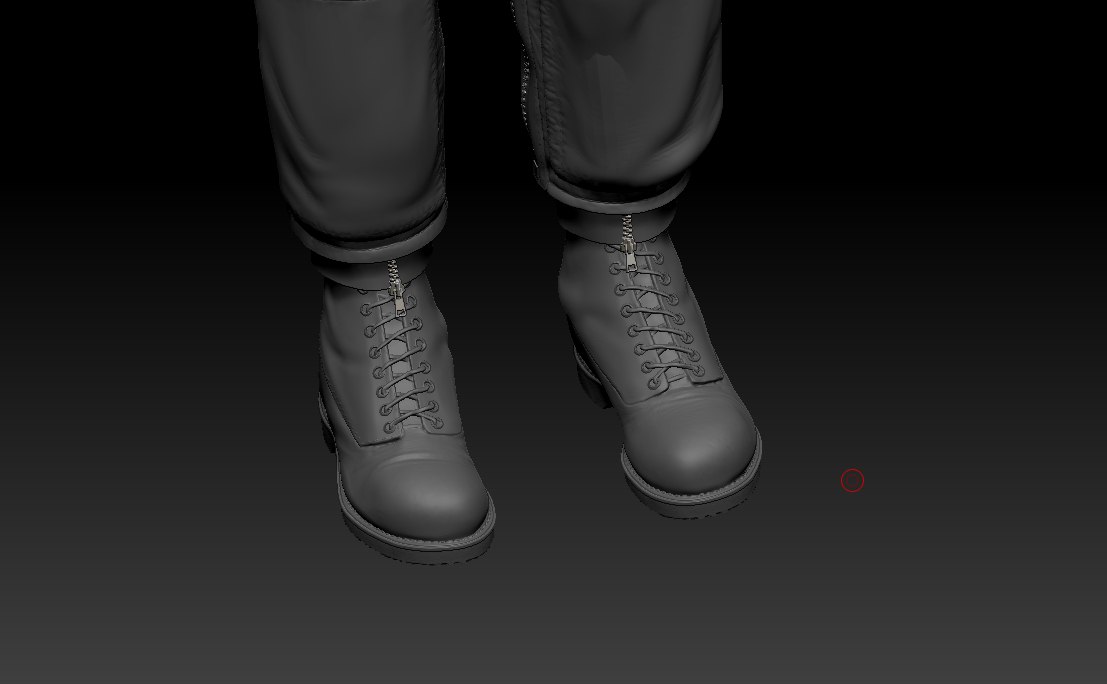 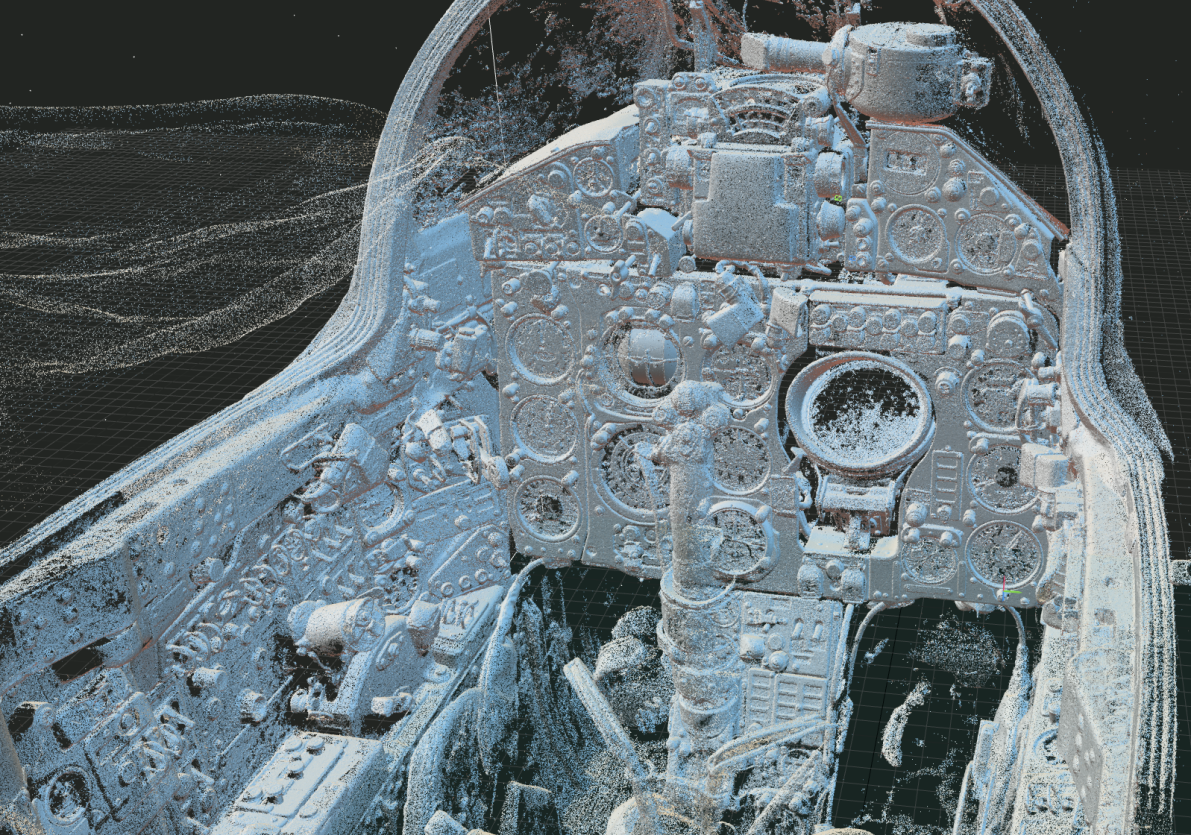 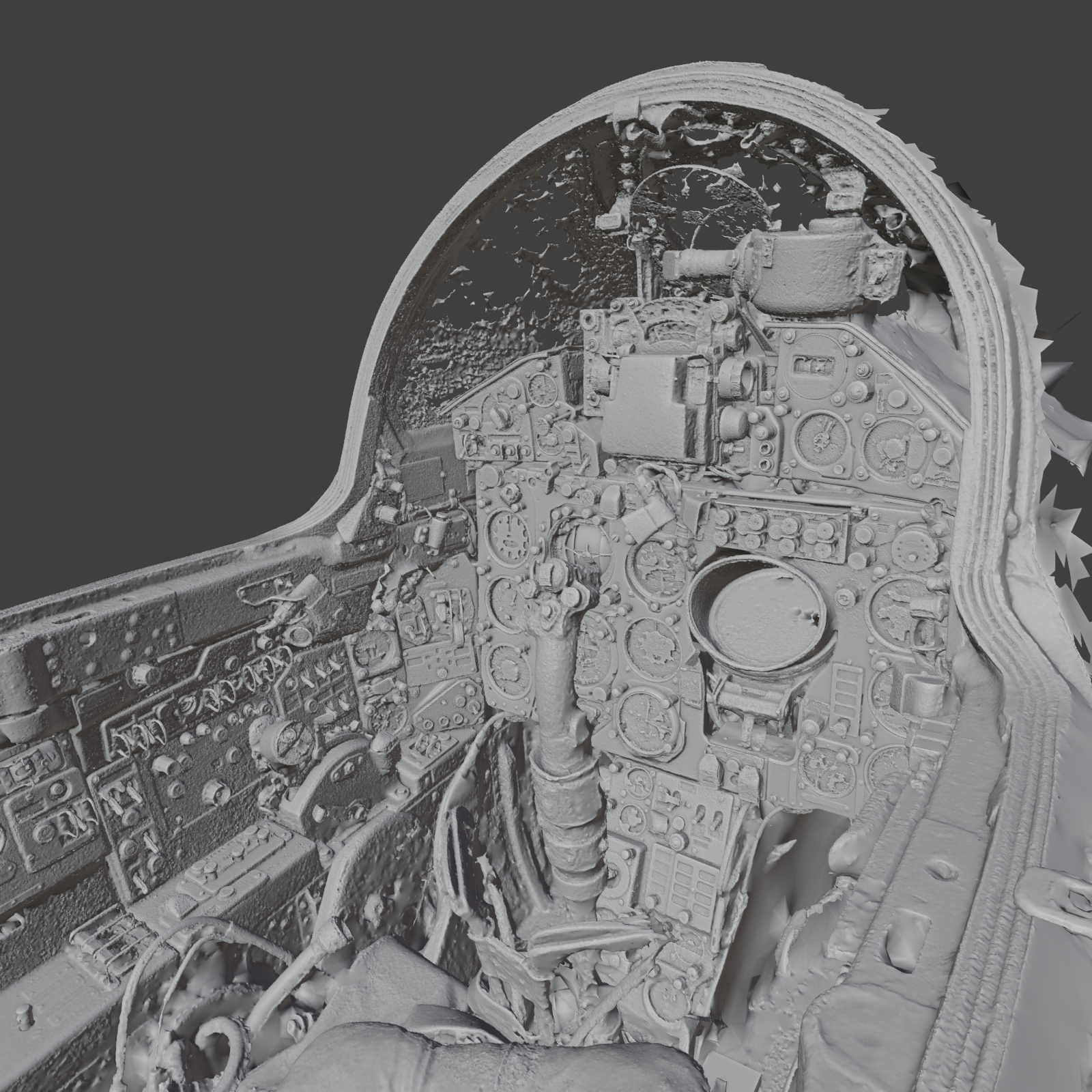 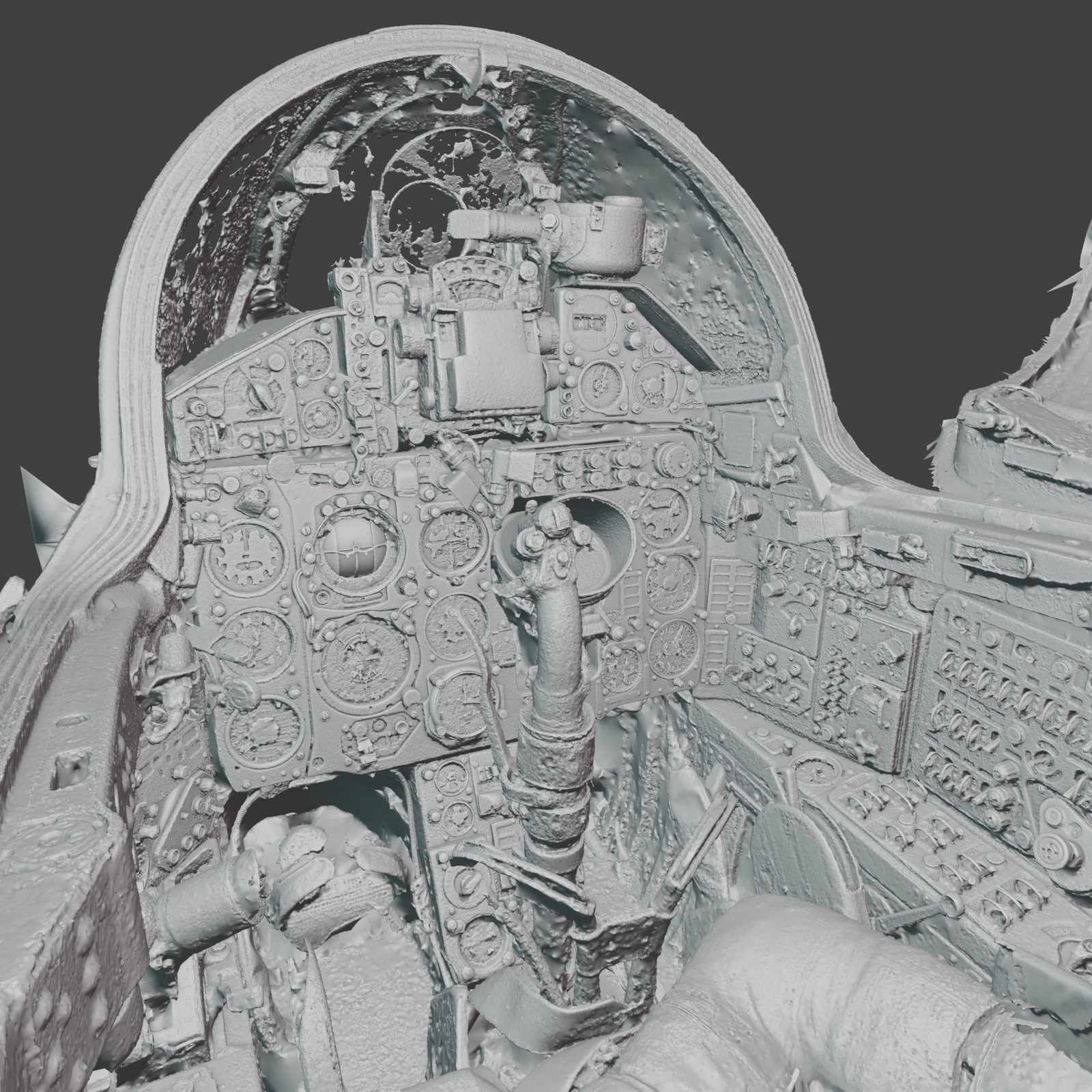 Wishing to fulfill our promise to overhaul the MiG-21bis, we have began preparations for this massive undertaking. Once the Corsair is released and completed, we will be able to give it all the needed attention.

In recent months we have expanded our library, which now comprises twice as many manuals and technical documents as it originally did. This will allow us to simulate some of the systems in a manner not possible at a time the module was released.

Furthermore, our head of the research department has taken a few trips to the museums in Poland and Germany to gather a large collection of pictures of the MiG-21s, with an intention to use them for recreation of the 3d model and textures through photogrammetry. There is no question, that in order to provide the best visual quality, we need to take advantage of all newest technologies. This technologies in turn give us an opportunity to turn things that were previously impossible, into a reality.

The attached pictures show closely the process at various stages: creation of the points cloud, mesh model reconstruction and finally texturing. This model will be a fine template to create the new cockpit for the MiG-21bis. 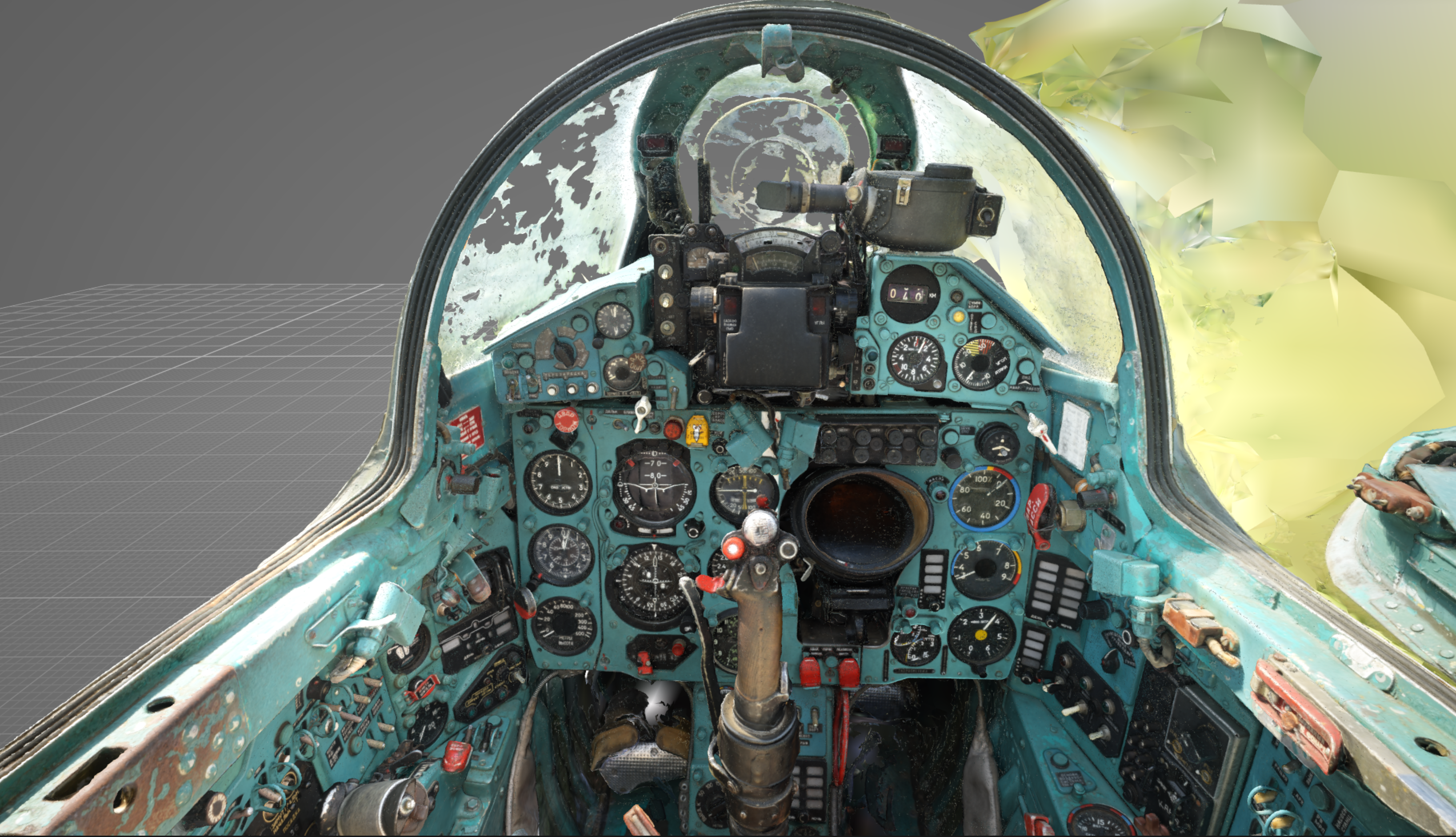 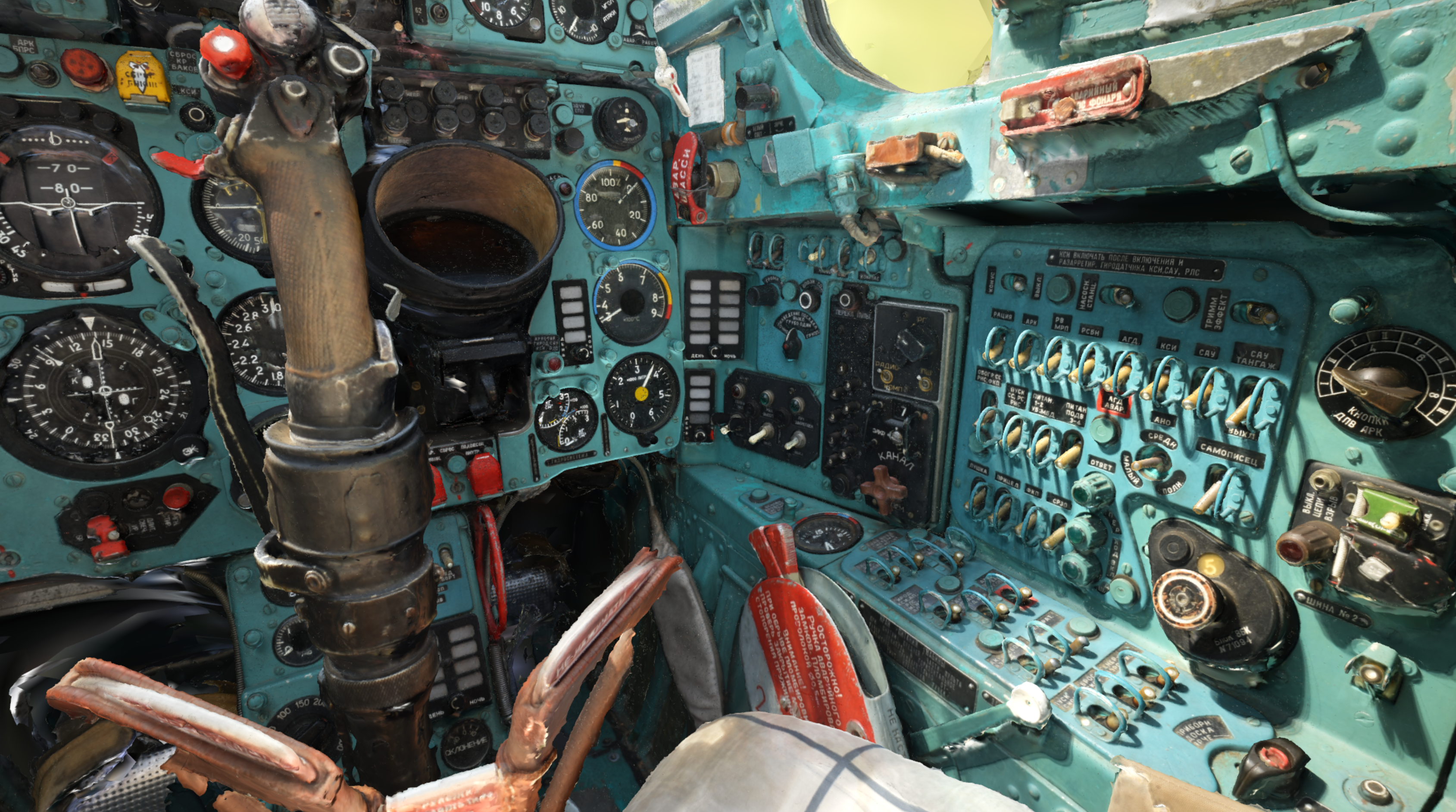 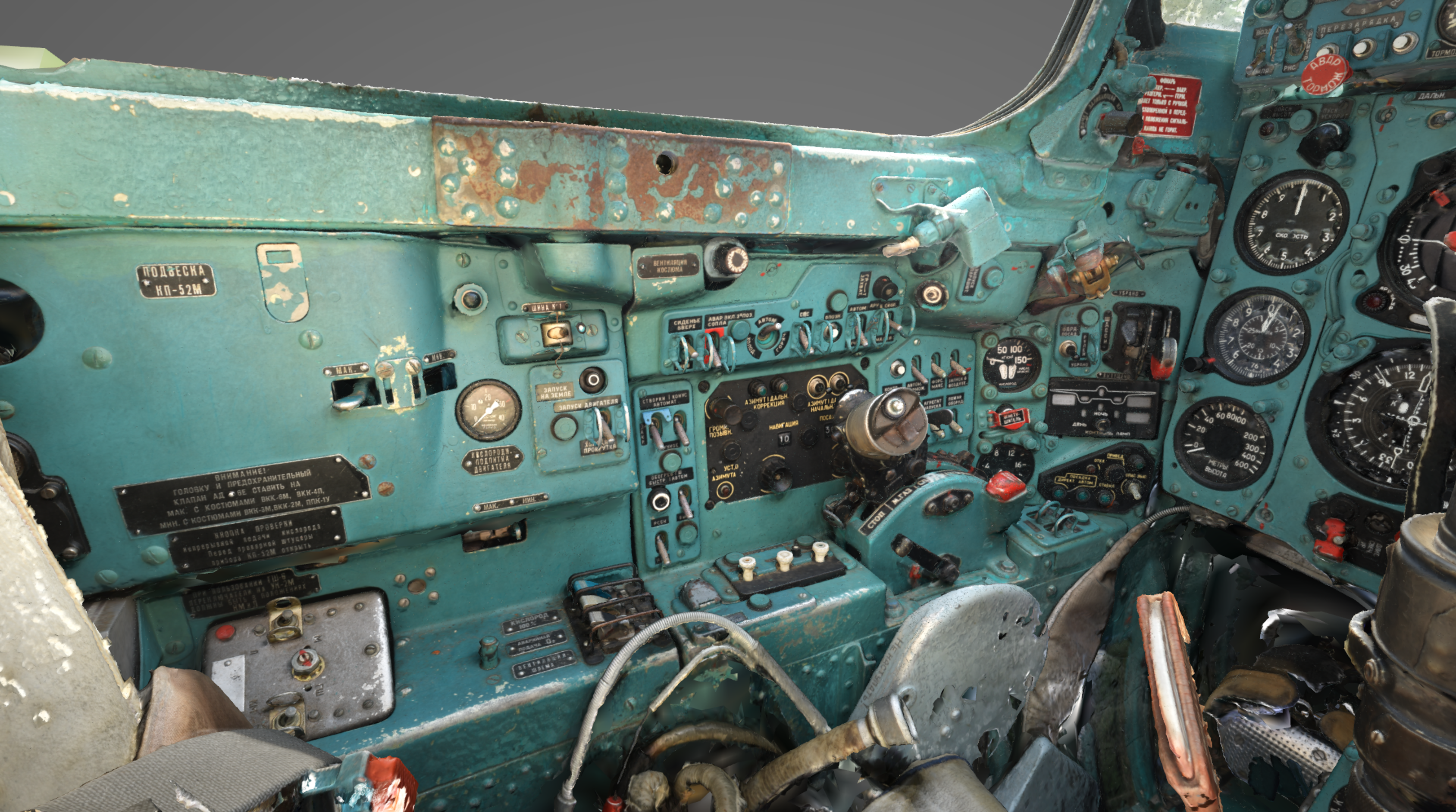 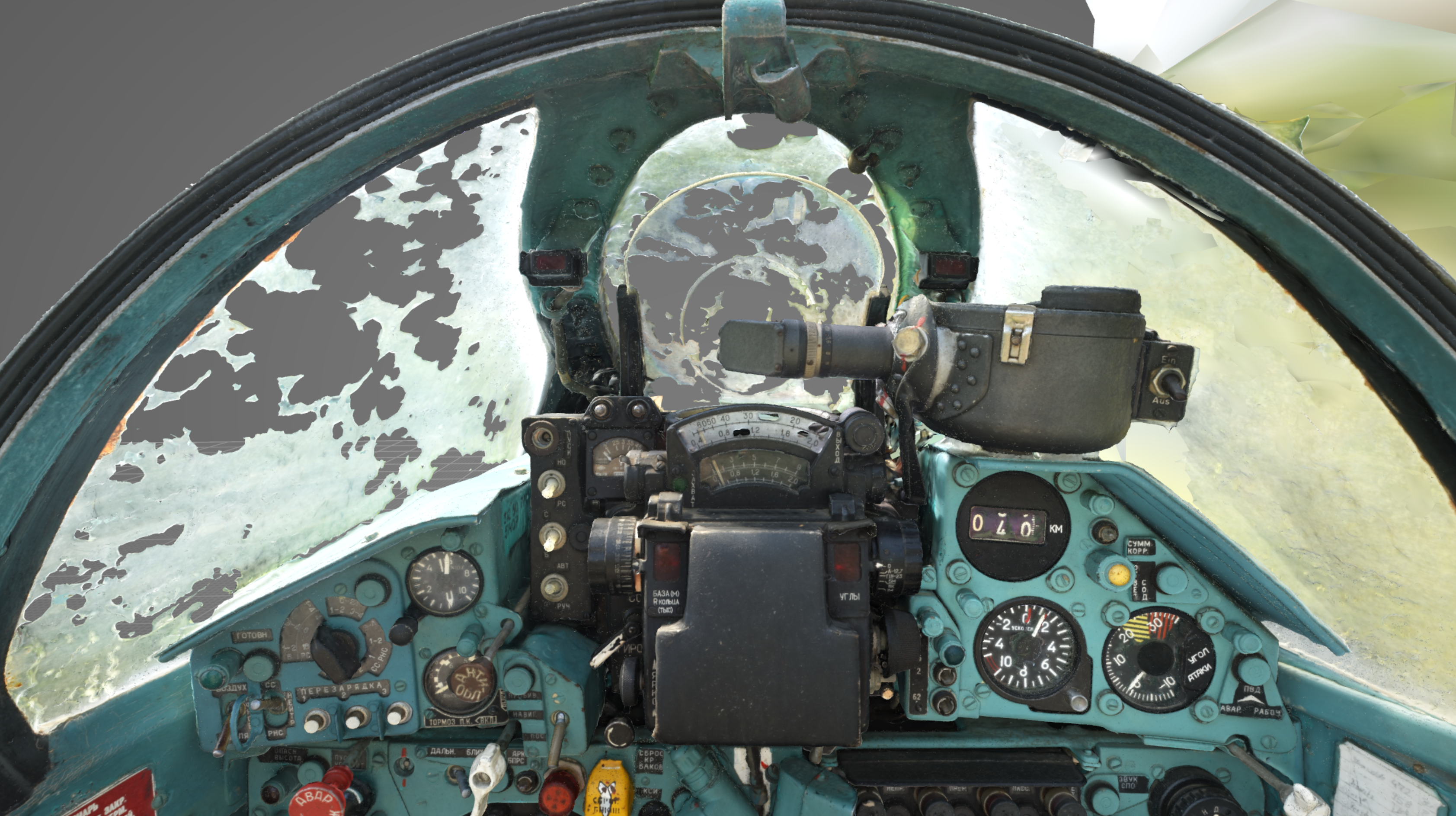 Hello Mirage pilots, we are happy to present you the upcoming engine update for our M-2000C module. The team has been working on a new engine model that is more accurate to its real life counterpart and allows for better damage and failure simulation.

This update should release on the Open Beta later this month.

In this update presentation we will first introduce the reworked M53-P2 engine model and explain how it was created. We will then talk about the change it will bring to the module flight envelope and finish by presenting the other changes this update will bring.

The Snecma M-53 is an afterburning turbofan engine developed for the Dassault Mirage 2000 fighter. The M53-P2 is an improvement to the initial M53-5 improving throttle response as well as dry and wet thrust.

The engine is controlled by a FADEC (full authority digital engine control) computer that translates the throttle movement into a linear and predictable engine response. The FADEC takes altitude, speed engine RPM and temperature into account to maintain optimal parameters inside the engine and ensure that maximum performance is obtained in every condition.

The engine model takes all possible external parameters (altitude, speed, temperature, humidity, pressure) into account to deliver a very detailed and as accurate as possible simulation of the engine.

This model is bounded by the operational limits of the engine, namely over-speed, over-temp, flameout and wear. These limits are not “scripted”, they are probabilistic meaning that when a limit is exceeded, a failure will occur after a randomized amount of time. The farther from the limit, the sooner the failure, until it is virtually instantaneous.

The new engine maximum performance has not changed significantly with the update, but it will be more accurate in all regimes of flight and also have a more realistic behavior.

The most evident change is the engine RPM that now goes up to 103% instead of 100%. This is because the aircraft was originally equipped with the less powerful M53-5 engine which would go to 100%.
The biggest change in performance will come from external temperature where a 15°C increase will reduce the overall thrust by 5%.
The new engine will also have an improved throttle response delay: On the ground, the time from idle to max thrust dry is 5 sec compared to 8 sec for the old model.

When exceeding a limit or by undergoing battle damage, the engine will now encounter better modeled failures. These failures range from engine wear reducing performance to catastrophic blade containment failure, destroying the aircraft, and transformation of the turbine into a modern art sculpture.

Emergency systems have also been improved with the addition of the emergency oil system, emergency fuel throttle, backup FADEC and afterburner cutoff. These function as they should to allow the pilot to save a damaged engine and return to base.

In order to accommodate the new engine, the aircraft flight model has been adjusted. The new flight model will keep most of the characteristics of the old one but with an adjusted drag for both speed and AoA, pushing it closer to known performance points.

The aircraft can now follow the standard break procedure, something that was not possible previously due to the drag being too high at high AoA.
The aircraft can also cruise at Mach 0.95+ at altitude with an air-to-air combat load.
The supersonic drag curve has also been adjusted, being the highest in transonic then reducing once out of this zone.

We also took the time to adjust the behavior of the aircraft on the ground. The new suspension should better reflect the real aircraft like the bounciness of the front gear.

The aircraft will now roll on idle on even ground and no brakes are applied, check the wheel chock before starting !

With the inclusion of the SAMP bombs into DCS, we added the SAMP-250 to the loadout of our Mirage. The SAMP-250 is a 250 kg general purpose bomb of french design that was used by the French Air Force before switching to the Mk-82 bomb.
2 versions are available, a low drag and a high drag version with a drag chute kit.
It is to note that the release profile for the low drag version has not been adjusted yet and that they will always fall long. We will work on fixing that in a future patch.

In addition to the engine rework, we implemented a lot of quality of life updates for the Mirage.
We will list some of them :


To go with the release of this update is the updated manual. The manual has been updated with the latest changes for the Mirage 2000C.

It will be available in your game files (DCS Word/Mods/aircraft/M-2000C/Doc) and can also be download here :

With this update we again pushed the Mirage systems realism where they deserves to be. We will continue to improve the aircraft remaining systems and work on more detailed failures and damages.

Third party developer, Deka Ironworks Simulations, has provided their roadmap for DCS: JF-17 Thunder. It is with great pleasure that we may share it with you. The module is scheduled to exit Early Access by December 2022. By the end of the year, the following items will also be completed:


Weapon features will be updated as soon as possible with missing sensor features and functionality such as the WA radar mode which will be added once they are available in DCS. 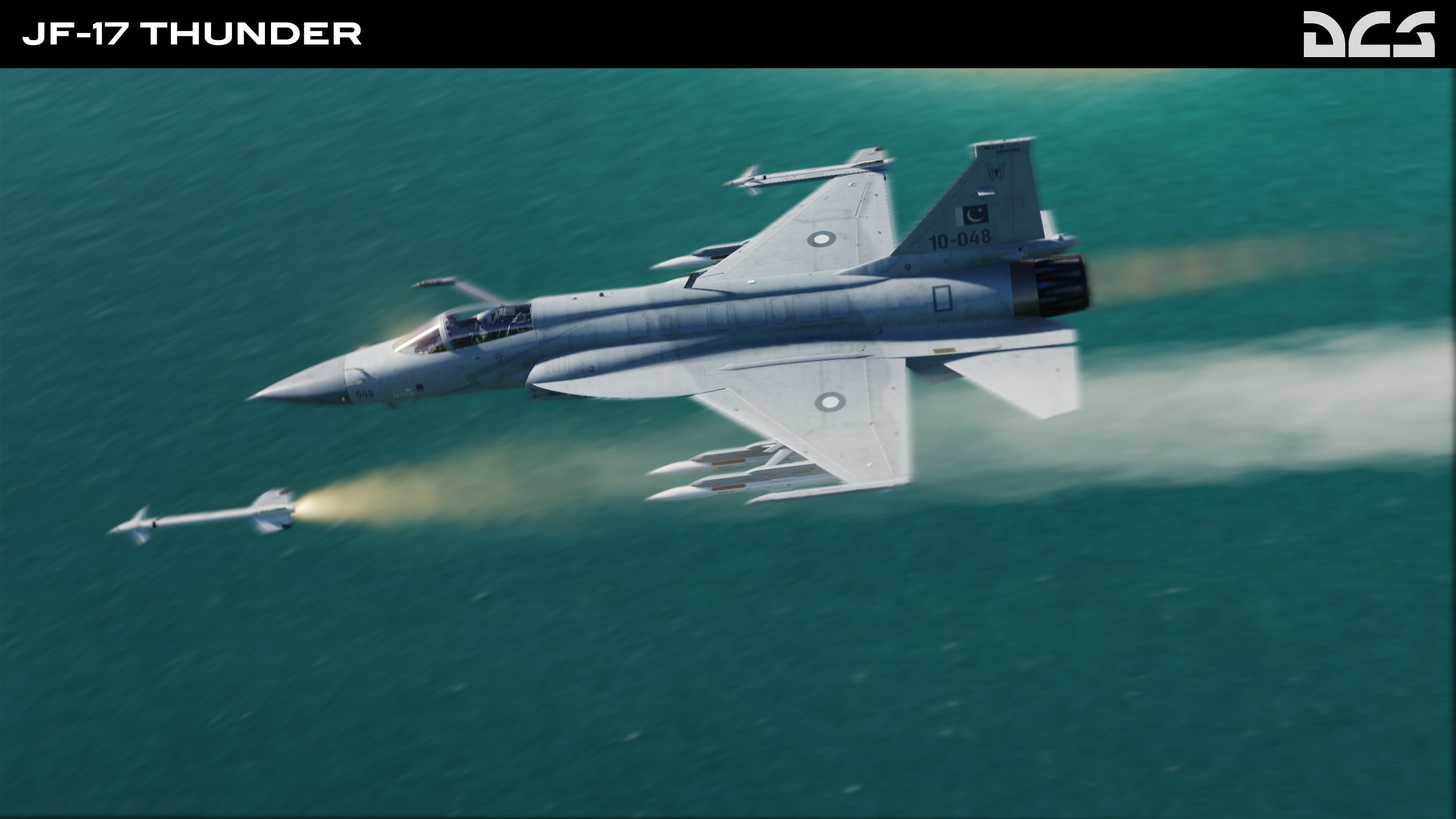